What is a Goldendoodle? 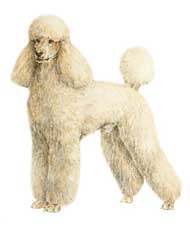 Golden Retriever    x         Poodle
The Goldendoodle is simply a cross between a Golden Retriever and a Poodle. Mating these two breeds together results in 'Golden' - 'doodles'. This type of breeding results a 'hybrid'.

There are also different variances in the generation of 'doodle' there are. For example, a simple cross between the Golden Retriever and the Poodle results in a 50/50 cross 'doodle' or an F1 generation. Now, take a doodle from that cross ( a 50/50 doodle) and breed it back to another 100% poodle, that cross results in a 75/25 doodle (more poodle than Golden Retriever), this is called an F2 generation. The last type of cross is taking two 50/50 doodles and breeding them together. Their offspring would be F1B generations, esentially two of the same 'breeds' bred together.

The 'Goldendoodle' is one of the most popular 'designer dogs' out there. What is a designer dog? The Encyclopædia Britannica traces the term "designer dog" to the late 20th century, when breeders began to cross purebred poodles with other purebred breeds in order to obtain a dog with the poodles' hypoallergenic coat, along with various desirable
characteristics from other breeds. Goldendoodles, along with Labradoodles, are the two most popular crosses. The goal in crossing these two breeds is to try and harness desired qualities of each breed, into one. People wanted the devotion, dedication, love and family orientation of the Golden Retriever, without all the shedding hair that caused a mess and triggered many allergies. A poodles coat is highly coveted because it is hypoallergenic, and sheds minimally, so obviously, they crossed with this breed.

Peoples assumption that poodles 'do not shed' is incorrect. All dogs shed. If you have hair you shed. The question is, HOW you shed it. Dogs like the Golden Retriever and Labrador shed their undercoats seasonally. Large clumps of dirty, thick, wooly hair falls out because new, healthy hair is growing in. Poodles lack a finite 'undercoat'. When their dead hair falls out, and new healthy strands grow in, the poodles tight curls trap the dead shedding hair, and prevent it from falling onto our couches, carpets or onto us. This gives the illusion that they do not shed, because whenever they vacate an area, there is no hair left behind.

Both of these qualities has made the poodle a very desired breed. But, what if you don't want a dog (like the poodle)that is such high maintenance to groom, or is less welcoming of new people, and can be too 'clingy' or 'underfoot'? Enter the Goldendoodle! In a perfect world we would be able to make the 'subway sandwich' of dogs, take exactly what we want, and leave out the rest. Unfortunatley Mother Nature is control in the genetic kitchen. In crossing these two breeds we ended up with many wonderful traits but BOTH breeds are represented.

The Goldendoodle tends to have long wavy locks of the Golden Retriever, with a slight curl to them from the Poodle. Depending how much each puppy took after which parent, the coat can be wavy, or very curly. The coat is MUCH LESS shedding and has MUCH LESS dander than the Golden Retriever, because of the poodle, but still sheds some because the Retriever is still genetically represented. Goldendoodles are very family oriented, tolerant, great with children, are active, loving and goofy. They love the water, enjoy other animals and require much less grooming than the poodle. The poodle also contributed it's extreme intelligence to the cross and so most doodles are very bright and easy to train.

This cross has obviously won the hearts of many people and families over the world or it wouldn't be one of the top two most popular hybrids in America.

Both great breeds were brought to the table, each wonderfully represented, and a great result is enjoyed by all.